Microplastic pollution is one of the biggest and most urgent issues facing the global textile industry. The loss of fibres from synthetic textiles, and the persistence of these  microplastic fibres in aquatic ecosystems, is an area of major concern.

Scientific studies have shown that a typical 5 kg wash load of polyester fabrics can release as many as 6 million microplastic fibres. It is estimated that, by 2030, synthetic fibres will represent 73% of fibre production, of which 85% will be polyester.

Microplastics have been detected in terrestrial and marine environments, as well as the human food chain.

Woollen garments also shed fibres during wear and care, but with a crucial difference: wool fibres biodegrade. They do not accumulate in the environment, but break down naturally to harmless compounds.

It is absolutely clear that wool biodegrades safely. It does so at different rates in soil and water, and depending on the environmental conditions. IWTO has an ongoing programme of work that is evaluating information on the loss of natural fibres in the environment, the rate at which they biodegrade, and the potential for impacts or concern.

How wool can help

Wool’s natural properties support less frequent, lower impact washing. Wool garments tend to last longer, and are kept for longer, than their synthetic counterparts. Finally, wool is a protein and it biodegrades, meaning that it is consumed by bacteria and fungi. It is part of the natural cycle of life on the planet.

Wearing clothing made from wool and other natural fibres means less synthetic fibres are released into the world.

Read more: Our Fact Sheet on Wool in Aquatic Environments 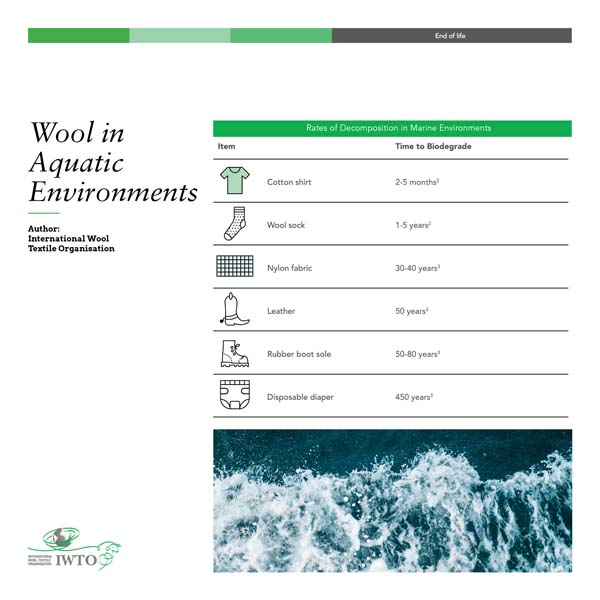